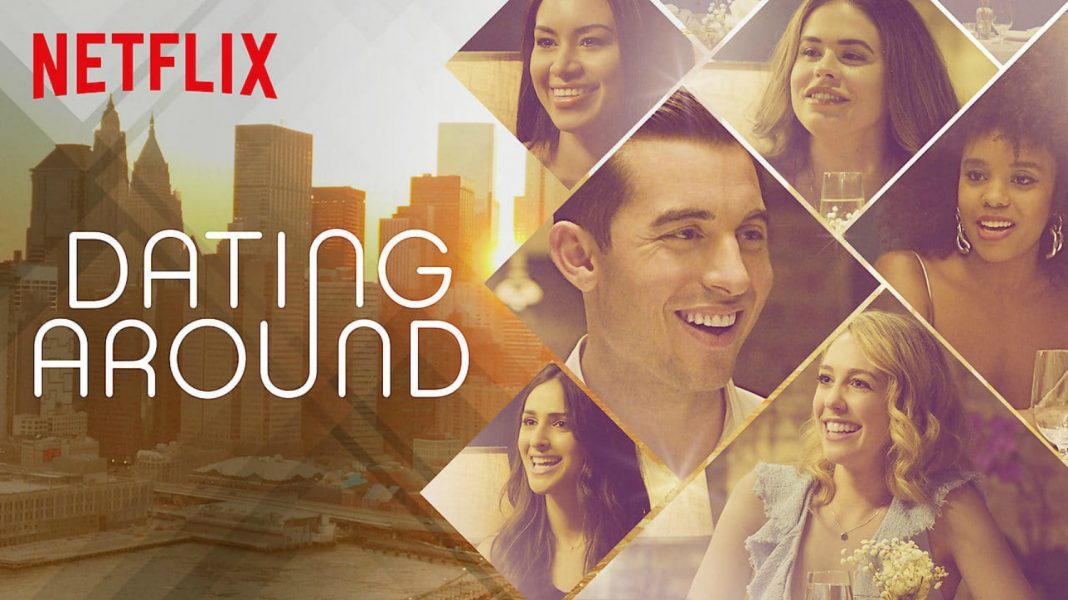 All about the new Netflix reality TV hit Dating Around

Everybody knows that the dating scene is a nightmare. But now we can all enjoy watching other people go through the trauma thanks to the wonderfully voyeuristic new Netflix reality TV show, Dating Around.

The concept of Dating Around is simple. One lucky individual has to go through dates with five complete strangers, and then if they hit it off with one potential partner, then they go on a second date.

While this sounds pretty simple, it’s gloriously watchable. This is because all of the dating action is edited so that it looks like it is happening at the same time. So you get to see the main contestant wearing the same outfit for each of the five dates, and the dates are then carried out as the couples get to know each other, work their way through the menu, and then realise that they have found their new life partner or discovered that they have absolutely nothing in common.

The action all takes place in the metropolitan wonderland of New York, and the contestants are mostly all suitably good-looking millennials with money to burn. Often, Dating Around makes for car crash television as the contestants make awkward small talk and realise that their prospective partner is hideously dull. But occasionally the fires of romance can be kindled and show that love can be found in the big city.

Who is in the current Dating Around series?

Dating Around has only been on our screens since Valentine’s Day, but it has already given us plenty of fascinating glimpses into the New York dating scene. Although there appears to be no shortage of fairly bland characters who appear to work in real estate, the show is edited wonderfully so that you can quickly get to know the contestants and follow their progress.

The concept of quantity over quality works well and the first episode saw the dull but handsome contender Luke make his way through five metropolitan singletons. What Luke lacks in personality is thankfully spliced together by the show’s editors to make for compelling viewing. His date with Ashley appeared to be hitting trouble when she doesn’t appear to be too impressed with Luke’s real-estate background and there were plenty of fireworks when Betty managed to get Luke to salsa dance on the sidewalk.

The second episode saw the pretty and independent Gurki opening up about her divorce to five New York hunks. It’s fascinating to see their reactions and Justin in particularly won’t have made any friends for giving Gurki a hard time as a result of her downbeat attitude to her failed marriage.

Then there was the weirdly moustached Lex in episode three who seemed to hit it off with the business asset manager, Corey, and show that love can blossom under the cameras. And with the elderly widower Leonard, tech recruiter Sarah and fashionista Mila in the first series, it seems that Netflix has worked hard to give us a fascinating glimpse of love in the big city.

A big part of the appeal of romance reality TV shows like Dating Around is when things go wrong. And thankfully Dating Around’s editors have spliced together the action so that we can know exactly what not to do when we next go on a date.

After Justin’s drunken tirade with Gurki, the reality TV wannabe has understandably made his Instagram account private so as to shield himself from the inevitable social media backlash. And then there was Jonathan who bizarrely spent most of his part of the show reading out the fairly lame lyrics to his own songs.

But the best action came when the analytics recruiter Sarah met up with the strip club boss Mr John. Thanks to Mr John’s endless use of sexual innuendo, Sarah called off the date halfway through the meal. But it didn’t stop there as she gave wannabe musician Adrian a good dressing down after he inadvisedly told her to ‘relax’, and then Sarah found herself on the wrong end of a walkout when she got into a suitably fiery debate with the hunky fireman, Antonio.

Does Dating Around bring anything new to romantic reality TV?

Admittedly there is no shortage of awesome romance reality TV shows out there. From watching Colton’s escapades in The Bachelor to seeing the air-headed flirting on Temptation Island, it seems that we are fascinated with watching other people fall in and out of love. As a result, it may seem that Dating Around is offering very little new to the already saturated market. But thankfully, the show is so well put together that you don’t mind the basic fact that it’s a pretty tired format.

Just as Netflix’s Tidying Up with Marie Kondo is bizarrely watchable, Dating Around manages to pull off the same trick, and you could easily watch the whole of the first season without meaning to. Even though the bimbos in The Bachelor and the antics on Temptation Island are often spectacularly embarrassing, there’s something weirdly heartwarming about the likes of Dating Around.

The whole show feels nicely modern with the inclusion of contestants from the under-represented LGBTQ community, and the inclusion of somebody in their advancing years like Leonard is another shrewd move from Netflix.

But above all, it’s the way that the show is put together that brings something new to the romantic reality TV format. Now you can watch five dates happening simultaneously and gasp in horror as one date, in particular, goes massively pear-shaped. Some critics have stated that Dating Around is a little too in thrall to New York City and that the range of contestants is too narrowly drawn from fairly bland industries.

But just as Netflix has managed to give us no shortage of awesome regular TV and movie treats, it looks like Dating Around has successfully rebooted the romantic television format and we can’t wait to see where it goes from here.